skip to main | skip to sidebar

Beauty out of Damage (USA) 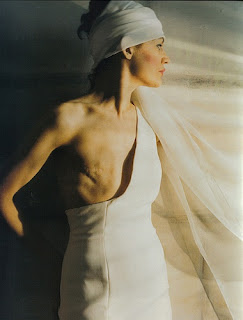 In 1991 the artist and model Matuschka was diagnosed with breast cancer and had a mastectomy. Following her surgery, which she discovered had not been necessary, Matuschka became an activist on breast cancer issues. Hoping to increase awareness of the prevalence of breast cancer, she continued producing artistic portraits of herself, many of them revealing the results of her mastectomy.
Her career took a very public turn with the appearance of her photographic self-portrait on the cover of the New York Times Magazine on 15 August 1993. Subsequently The New York Times received an unusually high amount of letters to the editor, ranking it as one of the most controversial covers in its history.
"So I lost a breast and the world gained an activist", Matuschka pluckily sums up her new life. And her activism has been unusually effective. According to the president of the Canadian group Breast Cancer Action, Matuschka’s NY Times cover "did more for breast cancer than anyone else in the last twenty-five years."
The photograph has received numerous awards, including a Pulitzer Prize nomination. The artist herself has received  numerous humanitarian awards, including Humanitarian of the Year.
Posted by !conic at 12:19 PM

Labels: 1993, Beauty out of Damage, Matuschka

What an iconic image , my grand father haves a poster of this girl in his room, I love it.